PHOENIX — Gov. Jan Brewer of Arizona signed the nation’s toughest bill on illegal immigration into law on Friday. Its aim is to identify, prosecute and deport illegal immigrants.

Even before she signed the bill at an afternoon news conference here, President Obama strongly criticized it.

Speaking at a naturalization ceremony for 24 active-duty service members in the Rose Garden, he called for a federal overhaul of immigration laws, which Congressional leaders signaled they were preparing to take up soon, to avoid “irresponsibility by others.”

The Arizona law, he added, threatened “to undermine basic notions of fairness that we cherish as Americans, as well as the trust between police and our communities that is so crucial to keeping us safe.”

The law, which proponents and critics alike said was the broadest and strictest immigration measure in generations, would make the failure to carry immigration documents a crime and give the police broad power to detain anyone suspected of being in the country illegally. Opponents have called it an open invitation for harassment and discrimination against Hispanics regardless of their citizenship status.

The political debate leading up to Ms. Brewer’s decision, and Mr. Obama’s criticism of the law — presidents very rarely weigh in on state legislation — underscored the power of the immigration debate in states along the Mexican border. It presaged the polarizing arguments that await the president and Congress as they take up the issue nationally.

Mexico’s Foreign Ministry said in a statement that it was worried about the rights of its citizens and relations with Arizona. Cardinal Roger M. Mahony of Los Angeles said the authorities’ ability to demand documents was like “Nazism.”

As hundreds of demonstrators massed, mostly peacefully, at the capitol plaza, the governor, speaking at a state building a few miles away, said the law “represents another tool for our state to use as we work to solve a crisis we did not create and the federal government has refused to fix.”

Immigrants and advocates for the illegal marched Friday outside the State Capitol in Phoenix.

The law was to take effect 90 days after the legislative session ends, meaning by August. Court challenges were expected immediately.

Hispanics, in particular, who were not long ago courted by the Republican Party as a swing voting bloc, railed against the law as a recipe for racial and ethnic profiling. “Governor Brewer caved to the radical fringe,” a statement by the Mexican American Legal Defense and Educational Fund said, predicting that the law would create “a spiral of pervasive fear, community distrust, increased crime and costly litigation, with nationwide repercussions.”

While police demands of documents are common on subways, highways and in public places in some countries, including France, Arizona is the first state to demand that immigrants meet federal requirements to carry identity documents legitimizing their presence on American soil.

Ms. Brewer acknowledged critics’ concerns, saying she would work to ensure that the police have proper training to carry out the law. But she sided with arguments by the law’s sponsors that it provides an indispensable tool for the police in a border state that is a leading magnet of illegal immigration. She said racial profiling would not be tolerated, adding, “We have to trust our law enforcement.”

Ms. Brewer and other elected leaders have come under intense political pressure here, made worse by the killing of a rancher in southern Arizona by a suspected smuggler a couple of weeks before the State Legislature voted on the bill. His death was invoked Thursday by Ms. Brewer herself, as she announced a plan urging the federal government to post National Guard troops at the border.

President George W. Bush had attempted comprehensive reform but failed when his own party split over the issue. Once again, Republicans facing primary challenges from the right, including Ms. Brewer and Senator John McCain, have come under tremendous pressure to support the Arizona law, known as SB 1070.

Mr. McCain, locked in a primary with a challenger campaigning on immigration, only came out in support of the law hours before the State Senate passed it Monday afternoon.

Governor Brewer, even after the Senate passed the bill, had been silent on whether she would sign it. Though she was widely expected to, given her primary challenge, she refused to state her position even at a dinner on Thursday for a Hispanic social service organization, Chicanos Por La Causa, where several audience members called out “Veto!”

Among other things, the Arizona measure is an extraordinary rebuke to former Gov. Janet Napolitano, who had vetoed similar legislation repeatedly as a Democratic governor of the state before being appointed Homeland Security secretary by Mr. Obama.

The law opens a deep fissure in Arizona, with a majority of the thousands of callers to the governor’s office urging her to reject it. 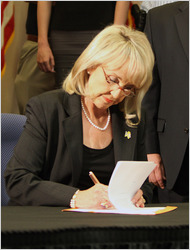 In the days leading up to Ms. Brewer’s decision, Representative Raúl M. Grijalva, a Democrat, called for a convention boycott of his state.

The bill, sponsored by Russell Pearce, a state senator and a firebrand on immigration issues, has several provisions.

It requires police officers, “when practicable,” to detain people they reasonably suspect are in the country without authorization and to verify their status with federal officials, unless doing so would hinder an investigation or emergency medical treatment.

It also makes it a state crime — a misdemeanor — to not carry immigration papers. In addition, it allows people to sue local government or agencies if they believe federal or state immigration law is not being enforced.

States across the country have proposed or enacted hundreds of bills addressing immigration since 2007, the last time a federal effort to reform immigration law collapsed. Last year, there were a record number of laws enacted (222) and resolutions (131) in 48 states, according to the National Conference of State Legislatures.

The prospect of plunging into a national immigration debate is being increasingly talked about on Capitol Hill, spurred in part by recent statements by Senator Harry Reid, Democrat of Nevada, the majority leader, that he intends to bring legislation to the Senate floor after Memorial Day.

But while an immigration debate could help energize Hispanic voters and provide political benefits to embattled Democrats seeking re-election in November — like Mr. Reid — it could also energize conservative voters.

It could also take time from other Democratic priorities, including an energy measure that Speaker Nancy Pelosi has described as her flagship issue.

Mr. Reid declined Thursday to say that immigration would take precedence over an energy measure. But he called it an imperative: “The system is broken,” he said.

Ms. Pelosi and Representative Steny H. Hoyer, Democrat of Maryland and the majority leader, have said that the House would be willing to take up immigration policy only if the Senate produces a bill first.

A earlier version of this article misspelled the last name of the Arizona state senator who sponsored several provisions of the bill. He is Russell Pearce, not Pierce.